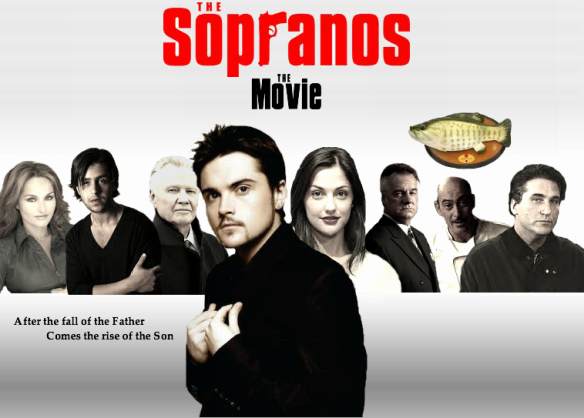 The Sopranos: The Movie

Daniel Baldwin as Himself

The Voice of Vincent Pastore as Billy the Big Mouth Bass

After Tony Soprano was gunned down in a diner while eating dinner with his family, it’s up to his son A.J. (Robert Iler) to take over the family business and seek revenge.

As the entire organized crime syndicate in the Northeastern United States fights to fill the massive hole left by Tony’s death, A.J. must take the reigns of the Soprano crime family in order to maintain the power and influence that his father had established.

Threats to the family are coming from all angles as crews from both New York and New Jersey are attempting to shut down Soprano Family operations and put their own in place. A.J. must rely on a few loyal lieutenants, including best friend and consigliere Slick Joey Benzo (Josh Peck), his father’s old Capo Paul “Paulie Walnuts” Gualtieri (Tony Sirico), family friend Artie Bucco (John Ventimiglia), and Hollywood actor turned mob enforcer Daniel Baldwin (playing himself), to maintain the Soprano Family foothold in New Jersey mob activity.

While external threats mount, A.J. is also fighting fierce internal battles with his own demons as he struggles with the depressive tendencies passed down by his father. A.J. recently began seeing an Italian psychiatrist named Gina Fellini (Giada de Laurentiis) after being plagued by several nights of dreams in which a Billy Big Mouth Bass toy fish began dispensing oblique metaphorical lessons in the voice of his father’s old associate, Salvatore “Big Pussy” Bonpensiero (Vincent Pastore).

To further complicate matters, while clubbing one night, A.J. develops an undeniable (and mutual) attraction to New York mafia princess, Vicky Guliatta (Minka Kelly) who’s father Vincent Guliatta (Jon Voight) is the head of the New York Guliatta crime family that has positioned itself as the biggest threat to the Soprano Crew’s position in New Jersey. In addition, many of A.J.’s closest allies feel that Vincent Guliatta put out the hit on Tony Soprano. Despite knowing how dangerous a relationship with Vicky could be to him, A.J. and Vicky are soon living together and passionately dedicated to each other.

2 thoughts on “The Sopranos: The Movie”