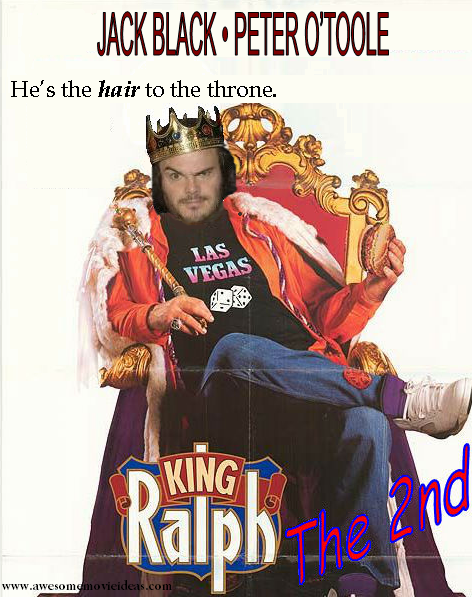 Matthew from Downton Abbey as The Duke of Wales, HRH Benedict Wilkes-Heatherington

Jude Law as Jenkins the Butler

Lindsay Lohan as Herself

When childless Sir Cedric Charles Willingham (Peter O’Toole) is ready to abdicate the throne after 20 years as the King of England, he sets out to find a worthy heir… and discovers one in the last place he’d expect (again): America!

Willingham’s search for England’s new king leads him to Los Angeles where he seeks out Ralph Hampton Gainesworth Jones II (Jack Black), the son of England’s former King Ralph (John Goodman). Ralph II is a spoiled slacker breezing his way through a life of partying, easy women, and a general disregard for responsibility and authority. His only concerns are his heavy-metal band “The King’s Chariot” and continuing his selfish ways above all else. Ralph II uses his father’s fame to gain access to all levels of privilege (pool parties at the Chateau Marmont with Lindsay Lohan (cameo), Supermodel administered facial scrubs using caviar, etc.) while giving nothing back to society. When Sir Cedric first comes upon Ralph II he is passed out face down in the middle of his pool after a particularly crazy night of debauchery (seen through a montage of pictures, a la The Hangover).

Eventually Sir Cedric convinces Ralph II to return to England and accept his role as the future King. We see a series of scenes where Ralph II’s rough edges come in direct conflict with the conservative royal establishment (Ralph II prepares to knight a female war hero and as she bends forward and exposes a view of her bosom, his resultant erection is seen on national television. “Oh no! Sir Ralph has a boner and the whole world is watching”). Yet these scenes still find moments to hint at the man underneath the uncouth facade. (He’s playing Wii Bowling with the befuddled African Ambassador and finding a common ground! He’s shredding a guitar solo with the North Korean Dictator and convincing him to agree to an arms treaty! The pizza he got delivered (potential product placement opportunity) for the Archduke’s birthday ceremony is a huge hit with the aristocracy!)

As Ralph II begins to settle into his new role and starts to believe that he could actually be a great king, the castle is shaken up by the arrival of The Duke of Wales, HRH Benedict Wilkes-Heatherington (the guy who plays Matthew on Downton Abbey) and his fiancé, Lady Mary Worthington-Smythly (Emily Blunt). The handsome yet loathsome Benedict claims that he is the rightful heir to the throne and he demands to be given consideration for the title of King.

While the relationship between Ralph II and the Duke of Wales is that of hated rivals, the prickly relationship between Ralph II and Lady Mary soon becomes romantic. Ralph II must, according to British Custom, take any visiting female who asks on several tours of the castle and grounds and Lady Mary requests these tours in order to learn the property she may one day reign over as Queen. During a montage that rapidly reveals a genuine connection, we see Ralph II and Lady Mary joke around, share their feelings and past experiences, and grow to love one another. Meanwhile the Duke of Wales acts like a huge jerk and generally mistreats Lady Mary (while carrying on an affair with her buxom American handmaiden (Kate Upton)).

Eventually the Duke of Wales sees that Ralph II has not only won the heart of his fiancé but also the people of England. He then challenges Ralph II to a contest for the throne in which each candidate will complete a series of tasks with the winner being awarded the title of King of England. Tasks include Greeting Foreign Dignitaries, England Historical Knowledge, and Completion of Royal Duties.

The Castle Staff rallies around Ralph II to help him prepare for the contest. His Butler Jenkins (Jude Law) quizzes him on trivia. The cooking staff helps Ralph II prepare a sumptuous feast to be served at a Royal Ball. The Royal Chauffeur sets up an obstacle course that Ralph II must navigate in his Rolls Royce. Etc. During this time Ralph II and Lady Mary can only share covert looks as the Duke of Wales has demanded that his fiancé remain by his side at all times to help him prepare for the contest.

When the contest finally arrives we see that through his past experiences, Ralph II is perfect for the throne. Playing Wii with the African Ambassador has made Ralph an expert in dealing with Foreign Dignitaries. His tours of the grounds and conversations with Lady Mary have given him an endless amount of England Historical Knowledge. His practice with the staff has allowed him to perfect the Completion of Royal Duties. Etc.

In the end, Ralph II gives a last minute from-the-heart speech that stresses how he will serve his country forever by ruling over it with a Queen who loves the nation just as much as he does (which leads to him shocking the world by proposing to Mary at the end of his monologue). Lady Mary agrees to marry Ralph II even if he loses the crown. The crowd rises to their feet in applause and Ralph II is named King of England as Peter O’Toole allows a single dignified tear to run down his face. Finally, the Duke of Wales goes on an angry rant that exposes his true nature to the world and gets punched in the face by Lady Mary, which causes him to trip over a chair and fall face first into a huge pie. He then embarrassedly flees the castle.

The final scene shows Ralph II’s Coronation Ceremony and ends with King Ralph the 2nd taking the stage, crown on his head, to deliver a rocking version of the Sex Pistols’ God Save the King. The End.