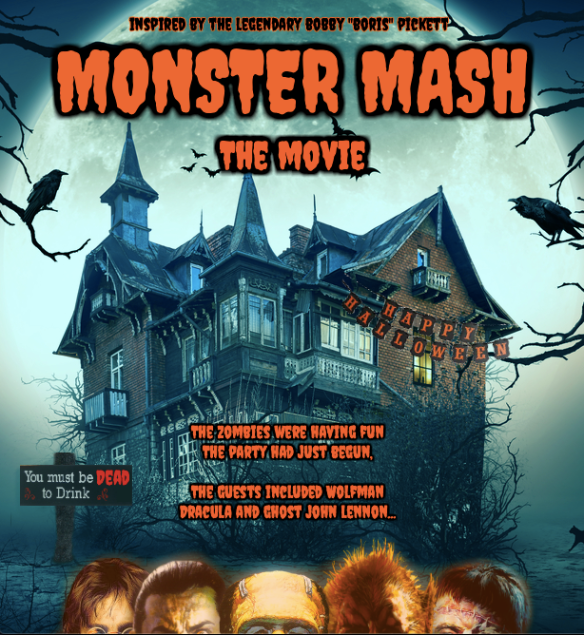 Kristin Wiig as Bride of Frankenstein

Chris Hemsworth as The Wolfman

Dave Bautista as The Creature from the Black Lagoon

Billy Eichner as The Phantom of the Opera

Jason Mantzoukas as Dwayne the Ghoul

The Strokes as The Ramones (performing as the Crypt Kicker 5)

It’s October 31st. Halloween. The spookiest day of the year. And Dracula (Oscar Isaac) is putting the final touches on preparations for his annual bash, the Halloween Monster Mash, held every year at Drac’s Manor in Transylvania. Ghouls are coming from their humble abodes all around the globe to be there.

But this year, there’s a special guest that has Dracula very nervous. He wants this to be the biggest, craziest, and SPOOKIEST Monster Mash ever.

After all, it’s not every year the ghost of John Lennon comes as the guest of honor…

As a rule, one must be dead for 39 years before getting an invite to the Monster Mash, in order to make sure you have proved your “undead” bonafides. And now Dracula, who it turns out is a huge Beatles fan, is nervously preparing to host Ghost John Lennon for the first time, as Ghost John has finally crossed the 39 years dead threshold.

As Drac stresses in the hours leading up to the party making sure everything is perfect, he’s followed by Igor, Doctor Frankenstein’s assistant, who’s been loaned to Drac for the occasion. Their interactions will be very funny as Drac gets angrier and angrier at stupid Igor’s mistakes. (“I said Type A blood in the keg, Igor! The Southeastern Vampires will see Type B blood as a major offense, you fool!”.. Really amusing stuff like that.)

Finally, night falls, and the guests begin to arrive in a raucous montage.

The party quickly gets out of control in a montage inspired by Animal House. Scenes include:

And just as things really get ramped up, the Crypt Kicker 5 (The Ramones as played by the members of The Strokes) hit the stage and begin rocking the night away.

And then Ghost John Lennon shows up.

Ghost John Lennon (Matthew Rhys) is ushered into the Monster Mash by Dracula and Igor. As they show him around the insane party of the undead taking place, we get to find out what John has been up to these past four decades. “Well, ya know, I like to haunt Paul from time to time. Almost ended me own afterlife trying to get through a listen of Egypt Station.”

We roam through the party with Ghost John Lennon as he enjoys hanging out with monsters and getting high off their drugs. It’s a really fun scene, watching John Lennon play beer pong with the Wolfman, then sharing a blunt with the Creature from the Black Lagoon. And just when we think it can’t get any better, John takes the stage, ready to perform a song with the Crypt Kicker 5…

So, Ghost John Lennon steps up to the mic, is about to let rip for the first time in four decades and… the air of anticipation is filled with a SCREAM from the back of the manor.

The ghosts, ghouls, and monsters all run to Dracula’s sitting room and find a female witch, on her hands and knees, looking at the body of Dwayne, the Ghoul. Everyone loves Dwayne. Or LOVED Dwayne… Because now it appears, Dwayne’s been murdered* (*We will establish earlier in the film that the undead can be “killed”, thus ending their spiritual existence on Earth..)

The Monster Mash has come to a halt as an undead murder has been committed in Dracula’s own home. The assembled can only look around and wonder: Who did it?

An investigation is required, but who to lead it? Who is enough of an outsider to view the situation with an unbiased eye and uncover the killer among the monsters? Who has the creative mindset capable of imagining how such a GHOULISH crime could have been pulled off?

Ghost John Lennon is, of course, the man for the job.

We then watch deep into the tension filled night as Ghost John Lennon interviews the guests at the annual Monster Mash, recognizing clues from subtle interactions and piecing together a dastardly puzzle of a Halloween gone wrong. The second half of Monster Mash: The Movie becomes a dazzling murder mystery, filled with intrigue, backstabbing, and hidden secrets finally come to light.

As Ghost John Lennon tries to solve the murder of Dwayne the Ghoul before the dawn breaks, the suspects are many, but the true culprit can be only one of them.

And at the end, once the case has been closed, and the murderer has been identified through Ghost John Lennon’s Liverpuddlian wit and savvy, we end the greatest Halloween event in the most fitting way:

With Ghost John Lennon finally taking the mic, backed by the Crypt Kicker 5, to sing a rocking version of The Monster Mash.

So, come along on a riotous, spook-filled delight, that veers from outrageous party comedy to an engaging whodunnit and back again. You’ll laugh in delight and cry in fear as Bobby “Boris” Pickett’s classic song is brought to life. Monster Mash: The Movie is a GRAVEYARD SMASH that’s sure to give a JOLT to your ELECTRODES.