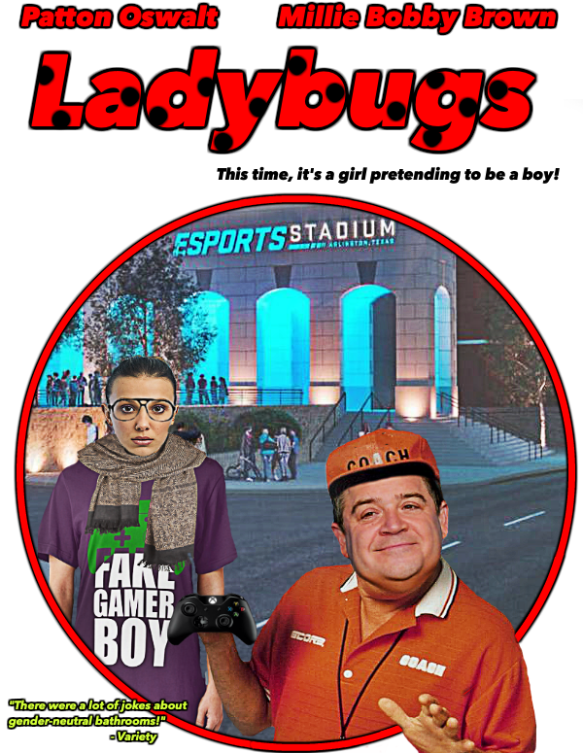 Chester Lee is in a rut.

An attendee at so many unsuccessful self-help seminars that he should start his own movement called, ‘How NOT to turn your life around”, Chester (Patton Oswalt) is struggling in every way imaginable. When we first meet him, Chester is stuck in traffic in his beat-up Prius, chanting along to an inner-peace podcast (“I’m great. I’m wonderful. Everybody likes me.”) while getting caught looking at the bosom of the woman in the car next to him. (Before driving off, the woman threatens to report him to the “Me Too!” movement in the first of what will be many jokes about today’s safe space / PC culture).

If traffic was bad, work is worse.

Despite being 20 years older than everyone he works with, including his own boss, Chester is the low man on the totem pole at tech company, Groople, that makes an app that allows you to track when your friends are using the bathroom. Groople recently came under fire when a leak revealed that it was secretly storing pictures of people using the can via it’s “toilet share” function. It was supposed to be Chester’s job to prevent the leak and he’s been on thin ice ever since the story blew up and triggered all the millennials.

We follow Chester during his day at work which includes multiple humorous instances of Chester accidentally offending the fragile young people he works with. (In one scene, Chester calls a person “she” without asking for their preferred pronouns and sends half the office out in tears. In another, Chester causes mass vomiting in the lunchroom when they discover the burger he’s eating is real beef, and not an impossible burger made of chickpeas. Hilarious.)

Chester finally heads for home and honestly, we’re wondering why this guy bothers living at all. And then, upon arriving at his dump of an apartment, we discover the one bright spot in Chester’s sorry life: His girlfriend, Glennis (Linda Cardellini), a pediatric nurse with a heart of gold. While it may be hard to believe Chester could score a woman like Glennis, she hints that she has always suspected her ex-husband was the real BTK killer (“They have the wrong man, Chester. I know it in my heart.”) and she is now looking for a nice, safe, genuine guy.

Glennis has a 15-year-old daughter, Martha (Millie Bobby Brown), who hates Chester and thinks her mother could do much better. Any time Chester is in sight, Martha buries her face into her iPad to avoid interacting with this loser of a man.

The next day at work, Chester’s douchey boss Jaxxson (Max Greenfield) calls him into his office. As Jaxxson begins speaking, it’s clear that the day has finally come: He’s about to fire Chester. Chester is frantic, looking around Jaxxson’s office for anything that might help his cause. And that’s when he spots multiple pictures of a sad looking group of teenagers wearing participation ribbons that say “eSports” on them. Chester asks what the picture is all about. Jaxxson tells him the company sponsors an eSports team called the Ladybugs every year, one Jaxxson’s own son plays on. The Ladybugs, Jaxxson says, really suck. Every year, they get last place in the annual nationwide Boys U16 Fortnite Tournament. Chester, knowing his firing is imminent, decides to throw caution to the wind. He tells Jaxxson that he’s an eSports expert and he’d be happy to coach the team. After some questioning, Jaxxson, sick of losing and intrigued by the offer, makes a deal with Chester: If the Ladybugs win the Fortnite tournament in 3 months, Chester can keep his job.

Over the next few scenes, we watch as Chester is introduced to the sad sack Ladybugs who include: Jaxxson’s son Blixon (moody, but a good kid at heart) (Finn Wolfhard), Trantony (a weird kid who’s obsessed with anime ladies), Gernie (a sassy little guy), Peenil (fat kid), and Merton (wuss). And boy, these teens are bad at video games. Chester tries encouraging them, but just ends up offending their soft, young people brains. In one outrageous scene, Merton demands they draw up an actual SAFE SPACE in chalk for the guys to stand in when they’re feeling threatened during game play. Chester can’t believe it. How will he ever relate to these kids?

One night at home after a particularly brutal loss in the Fortnite pre-season tournament, Chester tries asking Martha what he should do, but she refuses to speak to him, her head buried into her iPad. Chester demands to know what she’s doing on that computer all day. Finally losing her cool, Martha screams: “I’m playing Fornite, you dick!” Chester is stunned. He didn’t know Martha played the very game his career now depends on. He watches her play a few rounds and quickly realizes: Martha is good. VERY good.

Chester begins working on Martha, telling her she has to play for the Ladybugs to help him out. She refuses. Eventually, after much badgering, she agrees to sit in on a practice to watch the team play and give them tips… At practice, she spots Blixon and has a romantic daydream about him that will be ~50-75% less perverted than the one in the original Ladybugs without losing its heart. Finally, at the end of the practice, equipped with her new crush on Blixon, Martha tells Chester she would play for the Ladybugs if she could, but there’s one problem: The Boys U16 Fortnite tournament does not allow girls… Too bad.

From there, we follow the hilarious journey as Chester disguises Martha as a boy (now Matthew) so she (he!) can play in the Fortnite tournament. Along the way there are many jokes about gender, culture, and sexuality that will be sure to trigger…. LAUGHS. At first reluctant to become a boy, Martha eventually comes to enjoy dominating the Fortnite tournament, while helping her teammates get better, and opening her heart to both Blixon and Chester (as a father in law). As the Ladybugs climb the tournament leaderboard, Chester rises up the corporate ladder, and may just have a chance at turning his life around for once and for all: that is, if he and Martha can keep their secret from getting out into the world…

Ladybugs is a remake that one ups the original with love, laughs, and shots at the soft, overly-PC culture that we live in today. This comedy puts society’s feet to the fire while putting the audience’s heart to the skies. Gender may be not be a binary construct, but Ladybugs is a solid ONE (on a 0-1 scale)!

1 thought on “Ladybugs (a remake)”